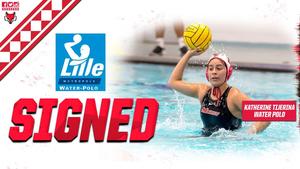 LILLE, France - Katherine Tijerina, recent graduate of the Marist water polo team, has signed to play professionally with Lille Metropolitan Water Polo. Tijerina will play in the premiere league in France, and joins a team that has won the French Elite Women's Championship five times, and the French Cup four times.

The Commerce, California-native is a two-time ACWPC Honorable Mention All-American, and was named First Team All-MAAC as a senior and Second Team All-MAAC as a junior. She ended her career as one of the most accomplished players in Marist history, ranking first all-time in steals (207), third in assists (152) and seventh in goals (162).

Tijerina becomes the second water polo player in three years to sign to play for a professional team, and joins 2017 graduate and former teammate Amanda Amorosa on the Lille squad. Amorosa was the top scorer in the league in the quarterfinals of the recent French Elite Women's Championship.
Source: Marist Athletic Website
Print