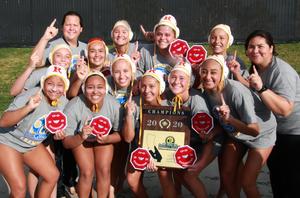 Head Coach Rory Bevins talks about this season, and the dedicated teammates that proved that Royals reign!

What a year for Rosary Water Polo! I will start by saying that I am overwhelmingly proud of this group. They won the Benson Cup, came in 3rd at the Claremont Tournament, and won a CIF Division III Championship. Along the way we had girls almost break single-season scoring records, and our goalie Alexys Puche set the single-season saves record at Rosary with 339.

We have been working towards this goal for a very long time. Three years ago we had a great freshman class come in (the juniors now) and since then we made it our goal to win CIF this year. We had a tough season last year, and the girls decided to start morning workouts immediately. So, the day after season ended last year, our varsity water polo team met at Rosary at 6:15 a.m. They ran a couple of miles and then headed straight to the weight room. Since then, this group has been focused on one thing, and to see them finally get the chance to celebrate all their hard work after winning the first CIF title for Rosary water polo in a very long time will forever be one of my best memories at Rosary.

For the senior class this was a four-year journey, and I know they worked every minute to win that title. Amelia Gonzalez solidified her role as a leader and a captain for us this year, and in a lot of ways she became the heart of this team. I will never forget seeing the smile on her face seconds after the final buzzer went off. Emily Shank, Julia Toth, Sammy Flores, and Lauren Riviere are other seniors that also deserve a lot of credit for the success of this team. They set great examples and worked tirelessly to push this team towards excellence. This team was more like a family than anything I have been a part of, and I think a lot of that credit should go to this senior class.

For our juniors and sophomores, the journey may have been a year shorter, but the work and dedication was exactly the same. Three of our top scorers this year were juniors, and two of our co-captains (Mia Solorzano and Alexys Puche) were also juniors. They gave their blood, sweat, and tears to this team and in big moments during our CIF run they showed up and made big plays. Junior Lauren Woolley was our leading scorer this year with 118 goals, and junior Nikki Culver had a breakout season with 70 goals.

All of our players earned every single win they had this year with hard work and dedication. This team never gave up, and they always picked each other up when things got hard. They deserve to be CIF Division III Champions, and I think they will be celebrating that title for a very long time.