Varsity Golfers Hit the Links for Their First 2010 Match 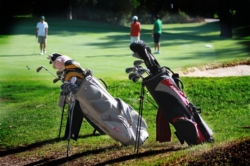 Royals Post a Win Over Brea and Come Up Short Against Diamond Bar.
The Royals Varsity Golf Team opened up the year yesterday with one win and one loss. The team played a three way match against Diamond Bar and Brea at our home course, Western Hills Country Club. The Royals lost to Diamond Bar 219 to 228, but beat Brea 228 to 250.
Joanna Henry was medalist (low score of the match) for both matches with a 37 which included two birdies. Lloyd Hoehle - 44, Malia Valder - 45, Mel Gonzalez - 47, and Victoria Corradi - 55 rounded out the scoring.
Next Tuesday we host the Royal Shotgun Tournament which includes some of the best teams in the county.
Submitted by
Coach Don Crosby
Print